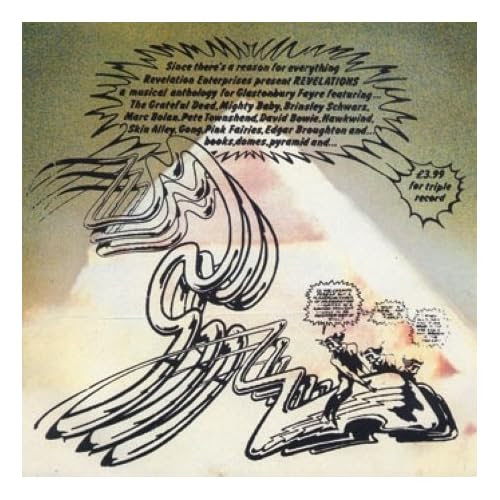 Just discovered the original Glastonbury gig featuring Grateful Dead , Marc Bolan , David Bowie and lots of others is available on Emusic  which unfortunately fell from grace but you can download it here. No 4x4s , id bracelets , lottery to allow you to mortgage yourself for the ticket so you can say you've been to "Glasto" then.

The album is interesting because it contains some very long improvised jams which by their nature are not available elsewhere. There have been various versions of the hard copy album over the years but if you can't track it down this download will more than suffice.

Just been thinking, an iPod (and virtually any Apple product) is , for a woman the same as a new handbag.

Think about it, woman buys a new handbag, she then has to buy:
A friend of mine bought an iPod recently and then had to purchase: 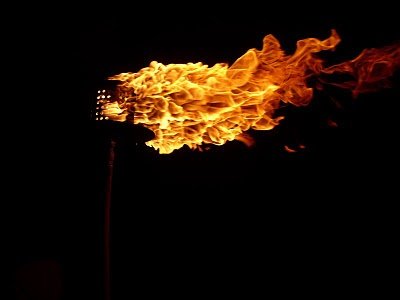 Well I was right about the burnin' (see previous post).

The Illumination of the Wall went off incredibly well with around 1100 volunteers lighting the way from Segedunum in the east to Carlsile in the west. The trail of light was tracked by a helicopter of indeterminate colour and , apparently NASA. I was involved as an illuminator with Cell4 , led by Andy who'd appeared on teh Country File rehearsal preview. I was lucky in the group I got who were all extremely sociable and technically more than competent in getting the beacon going. Neil and Alison did the beacon while Jay , Julie and Billy were the other torch bearers , the dreadlocked Jay giving us an impromptu juggling display with the (unlit) torches!! 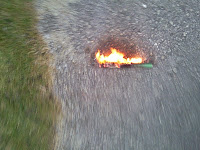 I got one of the torches , which burned rather more enthusiastically than originally estimated , with the flames and wax almost catching fire to my gloves resulting in some slight skin singeing. The torch at this point was discarded and doused using half a bottle of coke. A compilation of pictures and video from today can be seen below soundtracked by "Shining Light" by Ash, available for download here. 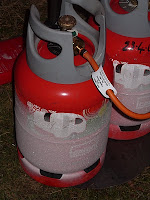 der and the cylinders emptied. We were told of it but it was still fascinating to see.

Here's my online photo album of the day.

And finally a bit of start to finish video taken from the helicopter:

There'll Be Burnin' And Lootin' Tonight

Today's the day Hadrian's Wall get's lit up. The web site is here. I've been assigned to the Elswick area of Newcastle. Ther's a pleasant area in the Fylde called Elswick that is the home of Bond's Ice Cream , the best Ice Cream in the world and they have a web site.

Newcastle's Elswick is a very different kettle of fish and hopefully NASA can distinguish the wall beacons from the car fires you're more likely to encounter in the area. It's not really that bad , but it's not a place you'ld go for a holiday!!

Anyway it's an excuse to include Bob Marley playing the afformentioned piece!!

Is it just me? It seems Apple and their cohorts think that by sticking an iPod dock and i- infront of the name you have a cool product. This is from a company that couldn't even come up with an original name (The Beatles Apple Corps was well established when Jobs & co came along) , and nicked their orginal GUI computer interface ideas from Xerox!

ake the iPig and iPanda , both the sort of thing you'd find in a cheap electronics shop

and normally wouldnt give a second glance to , but because you can connect your i-thing to it then you'll happily shell out £50 or so to be ripped off, It'll probably last as long as a Christmas Turkey , but and least you can eat the turkey.

And another thing , why is everyone so impressed that the shuffle facilty can chuck up some music they like every now and then. You put the music in there , it just has an algorithm that will do that every so often . It's not alchemy!!

I'm just wondering how long nefore we get the iPhone Shuffle with no screen that rings random numbers , after all that was their philosophy with music , "Life Is Random" - Right On!!

What else could we have?

The list is endless but you saw it here first
Posted by Mikey Dred at 22:09

Last night I saw my first Alan Bennett play at the Theatre Royal in Newcastle. While being well aware of his work from the Cambridge Footlights, Secret Policeman's Ball and Talking Heads but this was my first live experieance and very good it was too , living up to it's name.

Freaturing a 13 strong cast including Alison Steadman and David Troughton , the play , set in 1980 leads addressed lot's of social issues that affect our ageing population , with a healthy dose of transvestism, swearing, prostitution , sex and humour thrown in.

I did wonder at the theatre wide guffaws every time David Troughton used the word "Fuck" or one of it's derivatives. It was very funny and great to see it taken in the spirit intended rather than in snooty nosed silence.

Hopefully thsi will follow the success of the History Boys which hit the big screen and is still touring. Well worth seeing.

I'm still reading Charlie Brooker's "Screen Burn" , but hitting the home straight, and it's still causing me to laugh out loud on the train. Yesterday , a rather nice lady was having problems fitting her breakfast on one of the miniscule drop down shelves, resulting in much scrabbling about onthe floor for dropped biscuits and the like.

I was already reading and sniggering at whatever I was saying , and thought this could be taken in the wrong way. I then explained why i was acting like the proverbial loony on the bus (or on this case train) and it turned out she was also a big Charlie Brooker fan , so managed to come out of the situation intact.

The reason "Screen Burn" manages to be consistently funny is that it's a series of vitriolic fortnightly observations on the state of television in this new millenium and effectively documents the rise of "Reality" TV and it's despicable spin offs.

The Ultimate "I Don't Give A Damn" Gift

Just been thinking and Apple iTunes vouchers must be the ultimate "I Don't Give A Damn or Care About You Gift". Think about it. The recipient can hand over your money for something taht doesnt physically exist , in a proprietary format , only available from iTunes and only playable on iPods because of the proprietary format. You may think that giving nothing is worse, but that could be because you've forgotten , or that's what your potential recipient may think. An iTunes Voucher shows you have thought about giving them the most limited form of gift on the market

Added to that , the youtube links have stopped working but I think that's just Firefox , unusual because the blog and youtube are part of Google , so you might not seeCharlie Brooker's iPad review!! Still if you must buy itunes vouchers follow the links dotted about the page and I'll happily pocket the rewards of your sheepish stupidity!!

Roman Wall Blues ... And Lots Of Other Colours

On March the 13th , 2010 , I will be one of a thousand points of light illuminating Hadrian's Wall from Segedunum in the East to Carlisle in the West. The website for the project "Illuminating Hadrian's Wall" is here. Described as a "line of light from coast to coast", this is going to involve lot's of people playing with fire , once it goes dark to illuminate what is probably the largest pre 1066 man made construction in the British Isles.

Needless to same I'll be packing my camera and following up this post with some decent phoptographs and what actually happened on the day!

Below is a video, mainly featuring Vindolanda, soundtracked by Alex Harvey singing the only song I know about the wall, "Roman Wall Blues" an adaptation of a WH Auden poem. You can get the song here on his final album "Soldier On The Wall".

Over the heather the wet wind blows,
I've lice in my tunic and a cold in my nose.

The rain comes pattering out of the sky,
I'm a Wall soldier, I don't know why.

The mist creeps over the hard grey stone,
My girl's in Tungria; I sleep alone.

Piso's a Christian, he worships a fish;
There'd be no kissing if he had his wish.

She gave me a ring but I diced it away;
I want my girl and I want my pay.

When I'm a veteran with only one eye
I shall do nothing but look at the sky.

Whitby and La Rosa Have Their Knockers! 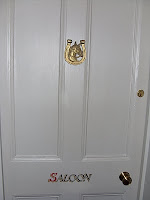 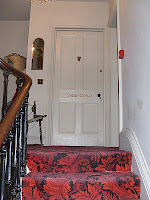 Just back from a long weekend in Whitby, staying at the most excellent La Rosa in the "Sacre Couer" room . All the rooms in La Rosa have their own distinctive knockers . Such as the Horseshoe / Horses Head for Saloon. 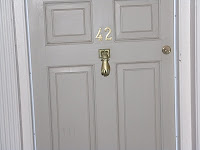 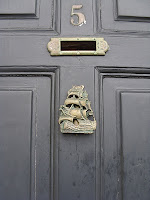 I don't know if this is normal , but we noticed that Whitby seemed to have a vast selection of knockers on display (the door type) which echoes the selection in La Rosa. La Rosa itself has a distictive ship knocker, a theme repeated throughout Whitby , not surprising given it's nautical history.

While we were there discovered two excellent pubs , The Elsinore (excellent pickled eggs apparently) and The Broad.
Posted by Mikey Dred at 22:10

Just coming home I noticed a human derelict on the steps of our local William Hills drinking from what looked like a 2 litre bottle of Strongbow and bumming cigarettes from anyone entering or leaving the establishment , which , for a change , today wasn't me (entering the establishment that is not being the human derelict!). I mention this only as an aside and for the fact that the titular Mr Brooker would have undoubtedly written a decent article based on the situation.

I'm currently working my way through "Screen Burn" and this is a dangerous thing to do in a public place. Before you read Charlie Brooker it helps to have a good dose of misanthropy and disdain for the scum that seem to impinge on our daily lives, and if TV and Charlie Brooker are to be believed make up about 95% of the population. TV is his target , which he hits as unnerringly as Kevin Costner in the undiscarded takes of Robin Hood:Prince of Thieves.

Anyway if you read him in public the people near you are going to thing you are mad as you continually burst out laughing , you have become the loony on the bus, YOU are the one they don't want to sit next to. I managed to sidestep this by warning the person I sit next to that I'm going to be laughing for the next half hour at a very funny book , so at least they are warned.

In the book Brooker admits he's an arachnophobe and no amount of "They're more scared of you than you are of them" will sway him. Charlie , this is the thing with spiders:
That's it!!

Another thing Charlie Brooker hypothesises the Joe McElderry / Rage Against The Machine situation , suggesting that we buy "Ace Of Spades" by Motorhead and make it the Christmas Number One. At the time the competition was from Popstars and Fame Academy. It's a though and you could do worse than downloading it here!
Posted by Mikey Dred at 17:35