I often listen to Brian Matthews' Sounds of the Sixties and love the fact that the only criteria is that it was a hit or released in the sixties, meaning you can get the sublime such as Jimi Hendrix , Led Zeppelin , The Beatles or Beach Boys , to some absolute rubbish  which has been erased from my mind. But listen to the show and you will hear what I mean.

One of my bugbears is certain peopel who will write in and say something loke could you play "Step Inside Love" by Cilla Black , it's my favourite ever record and my copy melted when left on  a windowsill in the sun and I've never heard it since !!  Brian now sends such ignoramuses a CD copy of their favourite record (which no doubt they'll microwave as soon as they get it) , but most of the time records are readily available in one form another if these people can be bothered to leave their front room or phone their local HMV. The apathy and lethargy of some people amazes me.


Then I noticed this for a review of a CD on Amazon:
"I was hoping this would transport me back to the 70's, but many of the songs I remember from the seventies, were not on this album, I was a little disappointed. Sorry to say it's put away in a drawer!"

The album has a tracklisting , didn't they bother to look before they ordered?

In Defence of Mike Ashley

Mike Ashley is percieved by man as a fat arrogant cockney git who knows nothing about about football and is the worst think to happen to Newcastle since the architectural abberations of T-Dan Smith in the 1960s. Ashley with able help from Derek Lambias certainly manages to continually shoot himself in the foot while it's still in his mouth , and look at what has happened since he came:


So basically with this catalogue of horrors everyone in Newcastle is wondering what the hell is coming next , after all this . I mean look at Portsmouth, Hearts  and Rangers , is Ashley any better than these owners deemed fit and proper by the English and Scottish Football Associatians?

Well really you have to look at where the club is now . Mike Ashley expressed a desire to make the club like Arsenal , to bring players through without spending a fortune and make the club a viable financial proposition. On thing Ashley can do is make money , look at Sports Direct. So where is the club now?

Basically the thing is the club is in an apparently better state under Asley that I can ever remember . John Hall's stewardship with hindsight could only ever have been temporary , but if at the start of the season you'd have said Newcastle could have a good shot at European football next season , I think you would have got a few laughs.

Basically Ashley is doing more right than wrong , and expect more gaffes , but beware of getting rid because there's not that many decent club owners out there
Posted by Mikey Dred at 11:37 No comments:

Last night I got my email confirming me as a World Book Night Giver for 2012 , The book I've chosen is "Notes From A Small Island" by Bill Bryson , and it will be great to try and get people to read this book. Like last year I'm going to base it around Newcastle and Tyne and Wear's Metro system and hope we dont get hit by the fact that there were no flights in or out of Newcastle Airport and the stretch between Tynemouth and Byker being clsed , meaning I couldnt do Wallsend, with it's Latin signs!!

Most people are enthusiastic , but a lot of people get very suspicious of anyone offering something for nothing , especially if they are alone on the Metro despit , there being other passengers in the vicinity. Last year Stephen Fry gave his away in Trafalgar Square , but mine will be much lower key. But it is a great initiative to be involved with m, and now need to recruit a few helpers ......

Below is a preview for last years event

Getting Older With Hall & Oates

I do find it amazing the number of people who refuse to acknowledge birthdays , or the fact they are getting older . Surely a birthday is an excuse for a celebration . And its funny when I was young people wee old after thirty , had grey hair , smoked pipes , wored cardigans , slippers and cords, and sat in a chair to await their inevitable demise. 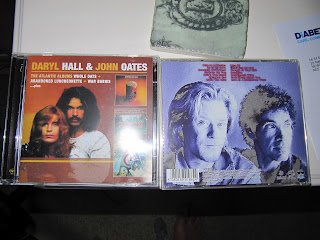 These days if you take reasonable care of yourself you can go on for a very , very long time and have great fun doing it. Itook delivery of the first Hall & Oates CD this week and compared the pics of these two with the latest of their CDs that I have "Do It For Love" , on the first CD Daryl Hall looks like an androgenous afghan hound hybrid , with John Oates looking similarly bestial , but this was the seventies and that got the girls and helped sell the records . I wish that I looked like that in the seventies , I might have even got a girl!! . On the more recent CD the guys look very good and this is 35 years or so after the first photographs were taken  , so while we'd all like to be younger I think we'd rather go for the current look.

This then led me to the discovery of the excellent Live From Daryl Hall's House site , so the guys are obviously enjoying life , and having a good time. A definite lesson for us all , always look for the good things , and be positive , and generally life will be better and make it easier to deal with the dross and crap that comes our way!!

Now That's What I Call Whitney

Sad to hear of the demise of Whitney Houston , a more than capable singer that inspired a million wobbly lipped X-Factor imitators . It's not waht she was , but what she caused that annoyed me , a diva of the first degree and lot's of aspirant imitators thought the behavious was OK without the talent to back it up . At least Whitney could sing and control her voice.

Which brings me to my second gripe , I have neevr owned , and never will own a Whitney Houston album , I don't find her music particularly engrossing , but due to compilations like the Now series , and various soundtracks and what have you I have the odd Whitney Houston track corrupting my collection. Still you knew she'd made it when she was name checked by Half Man Half Biscuit in "Everything's AOR" -

Saw this Daily Mail headline in the newsagents this morning. I thougt , has David Cameron done a Henry VIII and annexed the priories again , after he does need to fund his mates bonus payments. But no , it it's usual disregard for actual factual reporting , the Daily Mail was screaming about these two incidents:
The Daily Mail again shows blatant disregard for facts in search of a headline.

While a great deal of music and now books are downloaded and in e-format , I still like to have something I can hold in my hand. Also by getting a physical item it's probable that you have paid for it and the artist will get their rightful royalties . One of the issues I have withillegal downloading is that children are brought up believing they don't have to pay for music.

Anyway I'm getting sidetracked . The display above has loads of recent , box sets of CDs which are available for  under twenty pounds , in some cases under ten , meaning that the individual CDs working out around £2 each and you have a beautiful package as well . Leonard Cohen and The Kinks have had decent retrospective reissues out recently , and not forgetting Chris Rea's superb Santo Spirito Blues  3 CDs and 2DVDs for £15 !! In the display above are loads of great value boxes that should keep you occupied for a long time

These are the sort of reasons why I will always by music that has a physical presence. I'm not against downloads , and infact downloads are a great way of getting music out  to people , like Amazon Free MP3 section and iTune's single of the week. Included a video of Emerson Lake & Palmer's Hoedown , just noticed it when searching for something else , a brilliant deconstruction / reconstruction of a classical piece , wish every ELP song was as good as this!!

Well That Was An Anti Climax

So much for the snow , blizzard , sub zero temperatures forecast in the Mail and Express,. In Fenham it was cold but we got but a dusting of sleet . On the plus side Newcastle's Senegalese strike force returned with a brace of goals , and on Friday The Stand served us well as a town centre watering hole , with one of the best outdoor smoking areas in town.
Posted by Mikey Dred at 18:44 No comments:

Email ThisBlogThis!Share to TwitterShare to FacebookShare to Pinterest
Labels: Newcastle, Snow, The Stand

This is my fourteenth post of the year , and as soon as I'd written my thirteenth I thought I best write another one quickly , then couldnt think of anything to write about . I still can't but obviously started thinking about how society conditions us to be superstitious even though usually there's no basis to do whatever you need to do to cure it.

Take the number thirteen , various reasons for this one being that there were thirteen people at the the last supper and the thirteenth person was either Jesus (who got crucified) or Judas (who betrayed Jesus) , but surely all the others could have been the thirteenth person , then what about the people serving etcetera.

Also you get thirteen loaves or cakes in a bakers dozen , in case one is not up to standard. Most of the time all thirteen will be up to standard so in this case thirteen is a very lucky number.

Then there's don't walk under ladders , well that's surely rooted in common sense as ladders aren't exactly stable and if someone's up there they could drop something on you , got that from an argument between Batman and Robin in the sixties TV series where Robin comes up with various superstitions and Batman explains how they may actually have some foundation.

Then there the magpie rhyme , lets face if you see a single magpie , anything that happens like missing a bus , or the lights changing to red could be interpreted as sorrow , similar to horoscopes. Incidentally , apparently astrolgy apps are very big on smart phones , although that's not surprising given the sort of people I've seen with smartphones. Anyway I've now done fourteen posts this year so it won't bother me til this time next year.


On Monday (30th January 2012) Leonard Cohen released his new LP "Old Ideas" .. Leonard Cohen is 80 and just about to take up smoking again , really he can do what he wants . The voice is getting deeper , and often the songs are almost spoken , but he's well aware of his vocal limitions , skitting them in one of his compositions "The Man With The Golden Voice". BBC6 Radio 6 made it album of the week last week , and I'm just wondering how far it will permeate into the mainstream with most people's exposure to the man limited to Alexandra Burke's wobbly lipped bleating of "Hallelujah".

Thi sgot me to thinking of some signs of age , we only get old when we give up enjoying life and having fun , but certain things happen which shouldnt happen in your 20s:

I'm going to add to this list , but while my years are increasing I still act and feel as though I'm 15! I've just remembered this appropriate Neil Young song!
Posted by Mikey Dred at 06:47 No comments: