Excuse me . This is the article about this idiotic piece of government profiteering here.

Normally when demand outstrips supply, any sensible organisation increases the supply , and therefore increases it's profits. There are a small number of markets where this doesnt apply (One off concerts , precious stones , etc) , but in the case of transport , running more frequent services and purchasing or hiring more rolling stock is a very viable option.

So Cameron how are those essential , but low paid maintenance staff going to get to work? Oh I forgot , it doesnt matter as you're going to make them all redundant and wait for the private sector to pick up the slack when you abolish the minimum wage.

Unbelievably idiotic.
Posted by Mikey Dred at 01:54 No comments: Links to this post

A couple of months back my Yahoo Answers account was stopped because I'd transgressed their rules. They were unspecific , but said linking to my website forum was the problem. The part of the forum was the part which detailed the legal , loss leader MP3s that you can download for nothing , ie truly and legally free. I had also complained about the number of posters who advised using peer to peer services to download copyrighted music without paying for it , ie stealing . Yahoo still give space to these people while I have been permanently banned.

I was also thinking about the rise of the iPod and iPhone as the music player of choice for lots of people . It used to be that you would tape , or get an MP3 of an album and if you liked it , you would then purchase the said album. However now , because the album is on your music player of choice , there is no pressure to pay for the music. So that means that the artists lose out , while loads of kids grow up believing you dont have to pay for stuff. I don't know what the answer is , and the music industry is very resilient , but it is a very worrying trend.
Posted by Mikey Dred at 10:07 No comments: Links to this post

25 Years after it's original release "Money For Nothing" has been banned from Canadian Radio because of a single complaint. Don't get me wrong , I detest the record , although like some Dire Straits , but it's like when Ronan Keating changed the words to "Fairytale of New York" to make it palatable for American TV.

It seems the moral minority get their way because they make a noise . It's just plain ridiculous . Here's part of an article about it:

"Classic Dire Straits track Money for Nothing has been banned from public broadcast in Canada – after receiving just one complaint 25 years after its release.

The global hit single came out on the band’s iconic fifth album, Brothers in Arms, in May 1985 and won a Grammy for best rock performance the following year.

But the original version included the word “faggot” referring to homosexuals, and although a cleaned-up edition was made available, Oz-FM in Newfoundland played the first edition in February last year.

The result was a single complaint – but the self-regulating Canadian Broadcast Standards Council has upheld it, and no outlet in the nation can now play Money for Nothing the way Dire Straits intended it to be heard."

The full article is here.

Posted by Mikey Dred at 10:59 No comments: Links to this post

I do a lot of travel by public transport and train , especially frequenting Newcastle Station. The bane of my life are luggage trolleys that seem to have a life of their own and are great at blocking walways especially when you get a couple of peaple on "business trips" who insist on walking side by side , on once they're on the train seem to love wandering up and down before blocking somewhere with their luggage.

I understand that large suitcases do neccessitate a trolley or wheels or whatever , but amazingly I say a guy towing behind him a luggage rack , containing only his laptop!! Pardon me!! Could he not carry the damned thing like the rest of us . obviously not , but he made him look a total numpty!!

Posted by Mikey Dred at 11:43 No comments: Links to this post

This week Ryan Babel of Liverpool football club has been censured for twittering about Howard Webb's handling of their cup tie with Manchester United. To be honest I agree with Mr Babel , though the FA takes a different view.

Also we have Stephen Fry , Dara O' Briain and lots of other high profile tweeters or twitterers , posting their 140 character thoughts via their mobile devices. Babel's sin was compounded by the addition of an image of Howard Webb wearing a Manchester United shirt. What's that about? Twitter with pictures?? It's meant to be a limited text service.

It's like when there was talk of DAB services transmittting enhanced content such as images and video!! Isn't that television?

Anyway still think that Twitter is just for people who cant be bothered to properly socialise , as I say lazy verbal exhibitionists!! If you must tweet or twitter , here's a few devices that may feed your addiction !!!

Posted by Mikey Dred at 11:02 No comments: Links to this post

HMV - Will They Still Be Here Next Christmas?


HMV and Next have reported major disappointing results because of the snow. One thing I cant understand is that they sell CDs for as little as £2.90 delivered . How do they make a profit on that? Yes it's great for the customer but you cannot have most of your sales being loss leaders.

It 1975 my Job Seekers allowance was £3.25 . I bought "Wish You Were Here" by Pink Floyd in its black shrink wrapped package for £3.25 . If we take job seekers allowance as a measure that would me that your average new CD should be around £60 !! So when a new album is £10 you shouldnt even think about not buying it.

Anyway Rhino do a series of Original Classic Albums for around £12 delivered that you can get from HMV here or from Amazon on the carousel above . If your not careful you'll only be able to buy the latest X Factor output from your local supermarket , be warned!!
Posted by Mikey Dred at 11:18 No comments: Links to this post

All three will be sadly missed:

Posted by Mikey Dred at 21:46 No comments: Links to this post

Another Day - And Back To Work

Well first day back at work and my first surprise was the guy at the ticket machine trying to get his booking number from his 17" laptop. There may have been a good reason for this , but I reckon it was really because the guy was just a stupid arse.
Went to get my ticket , only to find a 10% increase in the fare and no plus bus option , meaning I would have to find some change before I got on the bus at the Darlington end.!! Things not exactly improving.
Finally my train journey was made very annoying by the Norman Collier announcement system and a monkey in the carraige.
Surely things can only get better!!
Posted by Mikey Dred at 14:57 No comments: Links to this post

Well Christmas and New Year have come and gone , and television is now drenched with advertisements for holidays as furniture such as the CSL one below:

If you want to get hold of the music check out my "Song of the Salesman" site here.

On the plus side the shops are now stocking Cadbury's wonderful Creme Eggs , which you can also get online from the Cadbury's site here. Here's a video the whet your appetite !! Mmmmmm

Posted by Mikey Dred at 08:34 No comments: Links to this post

Well posting has been sporadic , greatly due to facebook , and for the last couple of weeks due to some kind of 'flu. This meant I actually slept through New Year Celebrations , missed all the Christmas Parties , saw no one and was generally miserable , but on the sort of plus side ended up losing weight.

Anyway this morning is grey , rainy , miserable and I can't believe shops are open today!! Still pursuit of the greenbacks is all to some people.

One of the things that brightened my day is the "Rolling Stones Monopoly"!! They also have their own "Trivial Pursuit" as well!!. Just waiting for a "Cradle of Filth" edition now..... 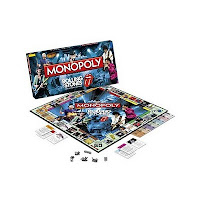 Posted by Mikey Dred at 08:27 No comments: Links to this post