Just got back from a superb gig and a half at the Journal Tyne Theatre in Newcastle. Fairport Convention supported by Phil Cool ... or so I thought. In fact the support act was Phil Cool and Ken Nicol. Ken Nicol is an absolutely stunning guitarist doing mainly acoustic stuff , but providing some stunning electric lead in lieu of Richard Thompson for the all troupe encompassing finale of "Meet On The Ledge". Phil Cool is no less a revelation , while still being funny as hell, he can song , play acoustic rhythm and write the odd excellent song.

Fairport themselves were excellent , the current incarnation comprising Simon Nicol , Dave Pegg , Chris Lesley , Ric Sanders and Gerry Conway. The played lots of stuff I hadnt previously heard , but also did a storming version of "Matty Groves" , three songs from "Babbacombe Lee" as well as "Who Knows Where The Time Goes" and the afformentioned "Meet On The Ledge", there's some youtube footage below:

Will pad this out with links and pictures but this is it for now.
Interestingly this is the first time I've bought albums on a USB Stick / Keyring , the Nicol & Cool and Ken Nicol - Initial Variations albums. Save's a bit of space in the CD racks!!

The official Fairport site is here.

A new toy , and when I eventually got it sorted , it works fine. A simple set up , and I assume that Apple / iTunes have something similar but this'll do me. I have Winamp running on my main PC , but you need to download Winamp Remote and have this running on your home PC.

Then you set up an account account and in the web settings on your ASUS Eee, selecting Realplayer (which I generally detest as a product) as the preferred streaming method , this seems to use the browsers (Firefox) inbuilt player. So now I can have my music anywhere as long as my PC is running!!

If you want to try it here's 25 Free MP3s from Emusic:

Modern Life Is Stylish (But Rubbish)

Well we've just had the deepest snow this year , here and the back garden is still white but the residue on the local footpaths is just slippier ice.

Earlier this year we had a new bathroom suite fitted, 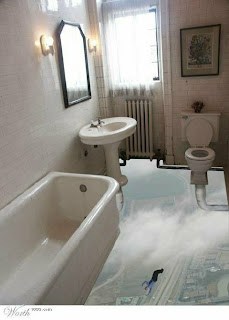 see here. It looks very nice and is very nice but has one potentially disastrous design flaw which came to haunt me yesterday when laeving the running tap during shaving to answer a phone call. The bath and sing have no emergency overflow!!! The weight of the water had pushed the integral plug down and I returned to the bathroom just as the water hit the top of the sink. Luckily I caught it just in time, but could be worse could be like this!! Now imagine walking into that bathroom!!
Posted by Mikey Dred at 19:44 No comments:

Email ThisBlogThis!Share to TwitterShare to FacebookShare to Pinterest
Labels: Bathroom

Well the snows virtually gone, the main PC has packed up, but walking for the bus this morning the bus driver let us on outside the front door. Admittedly there was a bit of a jam , but better than some of the miseries you get.

A few things I noticed in Dublin:

In these days of super duper mobiles , Dublin is as up to date as anywhere , but it seems everyone just has the default ringtone on their phone which is far more annoying that the MP3 customisation that we get over here.

Also in the posh (well five quid for a hot chocolate , knockin' Travolta's five dollar shake for six) Butler's Chocolate Cafe , you have to collect your drinks from the counter . I was flabbergasted. At five quid a drink I expect MORE than waitress service!!!

Alternatively in the decent pubs such as the Ha'Penny Bridge, The Druids Cair , The Queens and Finnegans they server the drinks at your table no matter how busy they are.
Posted by Mikey Dred at 14:47 No comments:

Worst winter for Eighteen years so they say. London brought to a halt. Lot's of snow here, and this is what it looked like here, soundtracked by the Yardbirds "White Summer" a version of which can be found here by Led Zeppelin , same guitarist different band. The video is bookended by pigeons hiding in a tree from a predatory, but cold, cat.

The Met Office is the best source for weather forecasts and can be found here.
Posted by Mikey Dred at 19:38 No comments:

Now back from Dublin , and thought the simplest way to show the pictures was to just do a brace short videos. The first is stuff around Dublin , soundtracked by the Dubliners "Seven Drunken Nights" which you can download here:


The second is from the Guinness Storehouse which is well worth a visit despite being in a fairly dodgy part of the city, the soundtrack of this is "Guaglione" by Perez Prado that you can download here. To Celebrate the 250th Anniversary of Guinness in 2009 there is a CD of iconic music used in their adverts , available here. This is a direct link to the Virtual Tour