This post really came about because Mojo carries advertisements for the Brennan Jukebox system , which enables you to have "all your CDs that you never play" in a single box that can be held in one hand , so really it's a sophisticates MP3 hard disc player m, excelpt with graphic or video capability. The Brennan website is here and I thinks it's a worthy but flawed system falling between the stools of convenience and minimalism. The photography and the site are certainly both enticing.


I decided to tr 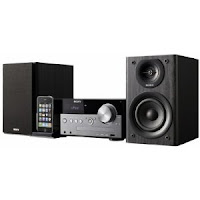 ack the box down , but all Amazon gave me were Sony MP3 (I assume) jukeboxes . The thing that then struck is that most Sony Music Players these days have an iPod dock . iPod is Apple not Sony and it's proprietary (ie not standard). In fact the iPod dock is becoming ubiquitous , with televisions , CD players , cars all having a slot for the damn things. So have Sony given in and have Apple won? It sure looks that way!!