The Greatest Punk Album In The World Ever... 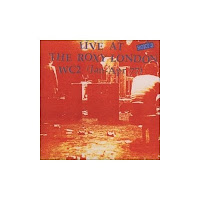 Mention the word punk to most people and it conjures images of the Ramones, Sex Pistols , The Clash and 1977. What I loved about the ethos is that anything you heard YOU could play , wheter you could play an instrument or not. Yesterday I took delivery of the album on the right , Live at The Roxy WC2 1977 . This contains no music by any of the bands above , the only ones still performing being The Buzzcocks and Wire , but it's rough and exciting and makes anyone either turn off or think "I can do that" which is why I think it is THE essential punk album.

It also contains Eater's rewrite of Alice Cooper's "18" as "15" . It's the sort of album that would annoy your parents and anyone brought up on a diet of the "Now" series , though we do know at some point they will release "Now That's What I Call Punk 21"!! featuring Blondie , Sex Pistols , The Damned and anyone else they can license. Really , if you like punk, you need The Roxy album!!
Posted by Mikey Dred at 22:15

The first coincidence is that Flossie originates from Nimes, but has spent the last seven years in Darlington (where I work) to purportedly learn English!! In her own words "That's knackered it". According to Jasper Carrot, Keith could make a sheep laugh , and he was funny as well as an excellent guitarist. They played seelction from their current album before beiing joined on stage for a "French Song" , namely "Si Tu Dois Partir" which had been played on the Brian Matthews show on Saturday , with Flossie in excellent voice.

The first set contained a lot of familiar material such as "Rising For The Moon" with all members of the band in fine form. At some point they all got out their ukuleles for "Ukulele Central" which was great fun, here's them performing it:

The second set contained more selections from Fairport's "Babbacombe" Lee concept album similar to last year's Tyne Theatre gig, with Ric Sanders going heavy of fiddle and effects during the "Dream Sequence". "Matty Groves" was brilliant , before the band were rejoined by Keith and Flossie for "Meet On The Ledge" before the lights came up.

Thus ended a day that had started at 4 am but well worth it .

Following the demise of our old CRT TV on our return from Dublin , we replaced with a new HD Samsung model , upgrading to a Virgin HD box and getting a Panasonic Blu Ray Media Centre, see here.

While HD is hardly a quantum leap in quality , the Blu Ray player has impressed me as it handles DVD upscaling, DIVX , Music and internet access in it's stride . Most Blu Ray players are in fact media centres which makes watching and sharing stuff extremely easy.
Posted by Mikey Dred at 14:11

How Good Are British Rail?

How goodat planning are British Rail. They show a complete lack of faith in their customers by installing ticket barriers at Darlington and Newcastle. Each time I come to them usually half are out of service , and the others either have staff or clueless customers blocking them , and even when you get someone who can use them properly often the tickets don't work.

Added to that all the cash ,achines on Newcastle station are inside the barrier , tough if you want to buy a ticket and dont have a debit or credit card , or just needed some cash as you were passing by. Also the pastie and sandwich stalls are inside the barriers so they must be really pleased at their loss of trade!! 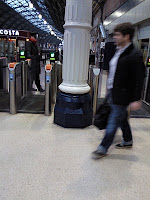 Then there's Darlington , where the cash machines are outside the barrieres , but the barriers are situated at the far end of the station giving you an unneccessary extract five hundred yards to walk to catch the train going north, capped off by the idiot placement of one of the barriers right in front of a canopy supporting pillar rendering the barrier unusable!!

Yuu'd be better off taking the bus!!