Just checking the reissues this month and it seems that everyone is going overboard with 2 CD , DVD deluxe reissues of old albums. We've had the Beatles Remasters series , where the sound has been scrubbed up and CDs augmented with a documentary which is unfortunately in Quicktime format . Why they couldnt do it as DIVX so you can play it on your DVD player I dont know, Quicktime is part of the Apple Bloatware Empire.

I recently acquired "In The Court of The Crimson King" and "Red" by King Crimson which sound incredibly great on my basic 5.1 system. These are part of the King Crimson 40th Anniversary reissues:

While this is all very well these Deluxe Reissues seem to be becoming the norm rather than the exception, very often augmented by out takes which were deemed "not good enough" for the original release. So this poses the question - "Is this just andnother money grabbing exercise by the record companies?".

Probably , but it does give you the opportunity the hear stuff that would have been lost , and hopefully doesn't affect the production and promotion of new music , but I feel that shops and companies are more likely to push a Beatles reissue than a new record by , say , General Fiasco. And that's a bad thing!!
Posted by Mikey Dred at 07:47

While Facebook has loads of flaws it , and other "social networking" sites seem to be promoting the rise of Microsocializing , that is to say having absolutely minimal contact with people while still having the ability to know where they are and what they are up to.

I was introduced to Facebook by a good friend , although I didnt have a clue what it was, and since then found it useful to post online photo galleries , make, regain and keep contact with friends from Tynemouth , to Tanzania and New Zealand , as well as playing online Scrabble and being involved with the Time Vampire that is Mafia Wars!!

In the end I think that Facebook is a good thing , but wonder have I really got 111 friends, though today someone who I met playing Scrabble who at the time was going through a bad time , today became happily married , and that sort of thing you can't buy . The good feeling affects everyone in touches.

There are many people who wont touch Facebook , maybe it isnt for them , but I've found it extremely beneficial since signing up and it's also probably responsible indirectly for getting me into Ice Hockey!!
Posted by Mikey Dred at 18:29 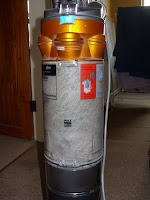 Our house is not dirty , I reckon it gets dusted, hoovered, cleaned every seven days. However I've just used our Dyson Trackball Hoover thing and done the main bedroon and office room and it's filled the dust compartmentment. It proves the Dyson is very efficient , but you have to wonder where it all comes from. Amazing!!

Having said that the rest of the house only half filled the dust compartment, that's it for another seven days. Just need to buy a new garden hoover as the one I got from Wickes packed in ...It had their name on it!!
Posted by Mikey Dred at 14:23

Apple, The Devil and Bloatware

Supposedly The Devil tempted Adam and Eve with an Apple . Now Apple are trying the same withe rest of the human race with theie iProducts.

I recently downloaded iTunes Version 9.0 for the PC , 88 Mb big. What the hell is the reason for that. It plays music and video's and allows you to buy stuff from their store (it their proprietary format of course).

The irony being that physically in the iPod Nano and Shuffle you have some of the smallest music players possible , however you need the afformentioned bloatware to pre load the damned things. Apple arent the only culprits , though , almost anyone with a market presence seem to think that size will impress . NO!! Functionality impresses , though I can't see Microsoft and Apple and the rest going for efficiency while they can make money without providing an efficient product with a relatively small footprint. Meanwhile we can watch Apple's latest product in their (simulated) advertisement soundtracked by "She Got Me Dancing" by Tommy Sparks , available here :

What is the meaning of exclusive? Given that Vodafone and Orange have just acquired rights to sell Apple's iPhone , which was previousle only available on O2 , I was surprised to see a full page advertisement in the Sunday Times advertising the iPhone's exclusivity to O2. I suppose you can't believe all you read in the papers then!!!
What I could belive is that my neighbour had provided me with a barrow load of firewood for my wood burning stove when some sizeable branches from his tree fell into our garden whilst on holiday. As well as clearing the wood away he also chopped the thing into stove and chimeniere sized sticks - well deserving of a couple of bottles of Oddbins fizz!!!

The Joy of Communication

The success of the internet , effectively invented by Tim Berners-Lee is due to the fact that it was open source and therefore free to use. Yes you pay for access via your connection , but the internet itself is free to use. If it hadn't been it would have just become another closed network. This was explained to me on TV last night on a program I caught some of while channel hopping , but it was probably on BBC4.

This morning Terry Wogan on the radio mentioned a cook who "peeled peas" , I hope this was a joke rather than some mad new cooking methodology, Sunday Lunch will take weeks to prepare unless Primark take over the supply with their vast army of slave labour (how else do you sell shirts for £3 , it's certainly not economies of scale).

One of the things the internet allows is anyone can use it to be contacted or to advertise effectively for free , though people have to be able to find you. Here are four sites which are essentially information sites about the owner and their trade but have still managed to generate sales of their products be it pictures or plants.

These are the new equivalent of the card in the shop window or phonebox, but with a potentially wider audience, and they show that the internet is for everybody and anybody.
Posted by Mikey Dred at 07:54

Just back from another excellent holiday in Oswaldkirk. The cottage (Honeysuckle Cottage) is excellently located close to Ampleforth and Helmsley and out of the range of mobile phones.

The sheep in the field kept escaping , but were unable to remember how to get back , so when they got agitated had to open the gate for them. 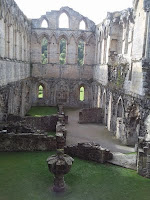 he holiday we managed to visit Riveaulx (left) , Bylands Abbey both, I assume , excellent examples of Henry VIII's destructrive tendencies , but Ampleforth is still in use and very impressive.

Also did the steam train journey from Pickering to Whitby resulting another visit to Folk Devils , where a young Goth girl (about 4'7" but 6' in her platforms) was unsuccessful in her attempted purchase of the latest Kiss offering!!!
Posted by Mikey Dred at 19:04