Can You Believe They Put A Man On The Moon?

Always regarded myself as a knowledgeable Pink Floyd fan so was surpised when my friend Mark Johnson asked me if I had a copy of "Moonhead" by them . I assumed it was a bootleg or something but was a commissioned piece for a 1969 broadcast of Omnibus on the BBC. The piece is reminiscent of stuff like "Set The Contols For The Heart Of The Sun" and "Careful With That Axe Eugene" driven by a descending Roger Waters bass riff.

It is amazing how the net allows us access to so much material we thought was lost forever , or in this case we didnt even know it existed!! 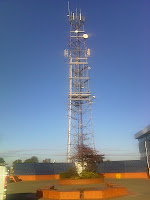 Walked on to an industrial estate the other day and was greeted by the sight on the right. If JG Ballard were still alive this would be the new religion. The cross , totem , centre of worship replaced by the mobile phone mast , which is taller than a lot of church steeples.

Theres even places to sit so its an open air church of sorts , and how many people do you know who dont have a mobile phone? Theres far more mobile phone users than attend any regulare religious ceremony. And their mobile often dictateds their lifestyle.

Itn the early nineties on mobile phone executive was expecting to maybe hit 20% mobile phone ownership. Today the figure is approximately 130%!! The mobile is ubiquitous.

It started out with voice , with text as an , extra which progressed to data and pictures , and now there fiull blown interenet access and most handsets are fully fledged personal computers.

Telecommunications is an industry than is almost universally beneficial , seldom causing any problems , apart from maybe the siting of some of their masts, but it has musch vaster benefits than bad side effects.

Anyway just people watch and see if your can spot the person who doesnt have a mobile phone!!