Just back from an excellent holiday in North Wales that way exceeded all expectations.

On the way down we stopped for lunch at a pub called The Black Swan in Ravenstonedale. The menu was not extensive, but everything on it looked absolutely gorgeous and we sampled the Lentil based Shepherd's Pie and Fish Pie . The service and staff were really friendly , and it was so good that we stopped there on the way back , and made the mistake of having starters this time , which just meant we couldnt finish the main course , full marks each time. Their website with all relevant information is here. 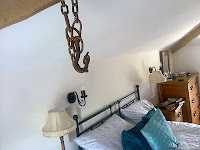 We arrived at the cottage , The Old Threshing Barn at Babell , near Holywell , to discover a superbly fitted place , with lots of room , and great sun deck and sun room . The hook and chain and low beams in the bedrooms are slightly disturbing , but this definitely rates as one of the best places we've ever stayed. You can check out the details here


Though most of the holiday was for relaxation , we had some excellent days out in:

One amazing thing was that I didnt come across a single record shop during the week , which is a bit disturbing. I wouldn't like Tesco as my only source of music.
All in all a major success and we'll be going back again.
Posted by Mikey Dred at 09:35

I assume this week finishes today , Saturday. It's been a bad week. The Tories get in , but don't get enough seats to form a government. This means that Proportional Representation rears it's head as that's the price the Lib Dems will want for a coalition. The BNP polled almost 2% of the national vote , under proprtional repesentation that would translate into about 12 Parliamentary seats , would it be worth it?

Oh , and to cap the week off , Leeds got promotion. Remember this is a club that refuses to disclose who owns it and has been through god knows how many administrations. Then again with Ken Bates involved what can you expect. Still maybe watching the video below of "The Damned United" will make things better:

Though next week things start looking up with gigs by Alabama 3 :

And then the most expensive tribute band in the world, The Australian Pink Floyd Show , worthe every penny and they have a giant inflatable Pink Kangaroo!! 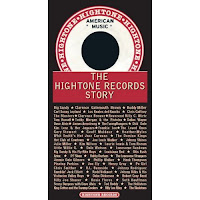 One of the things about having an interest in music is that sometimes you buy things then don't have a chance to listen to or watch what you've bought. The Hightone Records Story is one such example , which I picked up for under a tenner from Amazon Marketplace from a recommended price of £47!!. 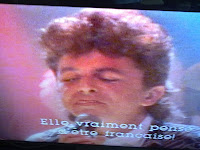 Anyway last night with a friend and a few bottles of fizz and take away pizza we started watching the DVD. This is generally excellent , leaning towards country , but the opening track "My Baby Thinks She's French" by Joe Ely , someone well respected in music circles , features a cobination I'd never in my worst nightmares considered could exist - a permed mullet !!!
Here's a picture from the video.
Posted by Mikey Dred at 10:21

Which is fine as long as I can pull the trapdoor lever.

The thing is , we're still going to have a government and New Labour is almost indistinguishable from the Tories. Also I wouldnt trust any politician with going for the tea unless I know them or it's Boris Johnson or Tony Benn.

The hung Parliament will resurrect the debate over proportional representation , but , flawed though it is , first past the post does keep out extremists like the BNP . Imagine if we gone two BNP members , the next election that may encourage more people to vote for them. No way Proportional Representation.

It seemes that loads of people have not been allowed to vote . My local Polling station was open for fifteen hours and I was waiting for a local delivery . At 12 it hadn't turned up so I went and voted. I'm just wondering why people went to polling station without much time to spare, but this could mean that resuklts may be challenged , so will there be by-elections there/

Because I've voted I can express my disappointment and the Tories being the largest party and potentially forming the next government. I'll bet 95% of the electorate don't have a clue about their policies and only voted Tory because David Cameron is not as ugly as Gordon Brown!!

If you look at all election results since the sixties that's been the case. So all labour need to do is replace Gordon Brown with , say , Daniel Craig or Sean Connery. If you don't believe me, these are the results since 1970:

So to win the next election Labour need to replace Gordon Brown with someone more photogenic than David Cameron . Job Done.
Posted by Mikey Dred at 08:55