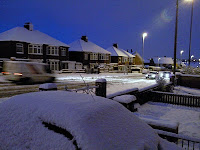 Nine days in to 2010 and we're still well and truly snowbound. I've not been into work this year , having the privelege of being able to work from home, but not everyone is so lucky. However it's only snow and public transport is still functioning fairly well , and Shalimar managed to deliver my pizza order last night without any problem!! 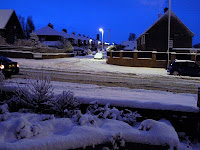 to sack Alan Irvine (who walked straight into the Sheffield Wednesday job , really glad for him) and we now have young Darren Ferguson at the helm , which bodes for interesting times to say the least. Unfortunately most of this weekends fixtures have been wiped out by the now , so Ferguson's first home match will be at home to Chelsea on the 23rd of January!! Still at least Drogba and Kalou are in Africa!
Posted by Mikey Dred at 08:03