What Goes Around Comes Around (Literally) 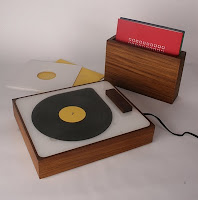 A guy called Martin Skelly has come up with this device device that enables you to play your MP3 Playlists like a vinyl record !! I checked the date , It's June 13th not April 1st so it may be true. Apparently you load your playlist onto the disc , and the put the disc on the player , put the needle on the disc and away you go. I believe each track has it's own colour so you know how long you have to go !! What information there is is on the guy's web site here.


While I'm impressed with the concept , it does seem a bit pointless , though will be a talking point at parties. The whole point of MP3 is convenience , and this device jst seems to make it more inconvenient to play your MP3s , but it a very stylish way. I personally won't be buying one but reckon it will sit nicely next to that iPad you've ordered!! You can get your iPad from Orange here:

The thing about this , if Apple were marketing it , then it would sell by the lorry load , let's face it , if you can make a success of the iPad and iShuffle you can sell sand to Arabs and ice to Inuit!!
Posted by Mikey Dred at 14:08