Seven Days In The Premiership

Being a Preston North End supporter, I don't have much to do with the Premiership, though living in Newcastle it's unavoidable. There's been a couple of incidents that have struck over the past week.

The first is Arsene Wengers rant against Stoke City's so called physical approach. He managed to fool even me. Failing to mention Adebayor's high challenge on DeLap and Robin Van Persie's sending off he went off on one about Stoke trying to injure his players. Everyone was focussed on Wenger's rant, NO ONE was thinking about the Arsenal team (with a bad injury list), and their current bad run. What do they do against a rampant Manchester United? The win and put their Premiership challenge back on course. Again Wenger shows his genius , taking all the flak while the team sorts itself out and returns to winning ways. The guy is a veritable god!!

Secondly the Referee's Ruling body want to get their Respect Campaign back on track following run ins with Joe Kinnear of Newcastle and Alex Ferguson , to name but two. They seem to conveniently sidestep the fact that respect must be earned , and regard any form of criticism as an attack on them. When they screw up there seems to be no comeback and and anyone who dares say anything is pilloried.

The latest is the situation with Barnsley's Iain Hume being hospitalised in the match against Sheffield United, the referee refusing to take action against some very physical action.

In and Everton v Liverpool derby Jamie Carragher wrestled Jolean Lescott to the ground on three occcasions and the referee di nothing, but was quick to red card Tim Hibbert after he'd touched Steven Gerrard in the area (after a word for Stevie G).

Until referees get it right and stop acting as though they're infallible they are not going to get respect , unless their name is Pierluigi Collina. 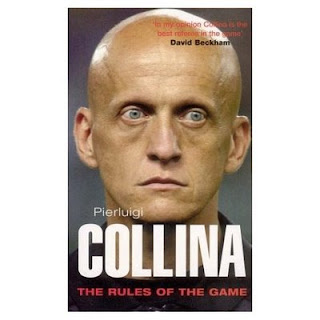 And now we have the Maradonna "Hand of God" thing raising it's head again. Maradonna got away with it , the referees / officials should have taken action at the time . They didnt because FIFA / UEFA encourage cheating, simulation is rewarded with free kicks and cards for the opposing team.