Every other record on the radio is a "Christmas" record. Some are good , some are absolutely atrocious. It's obviously Christmas, it's still dark and rainy outside.

Sadly it's Terry Wogan's final week before retirement and they reckon the listership for Friday's show will top 14 million!!. Thank god they got young Chris Evans to take the reins rather than that Jonathan Ross. They reckon that after Brian Matthew's Sounds of the Sixties on a Saturday a third of listeners turn off when Mr Ross makes an appearance. Here's Terry doing his "hit" , hilarious!!

were doing some excellent cards like this Mr T spoof!!! 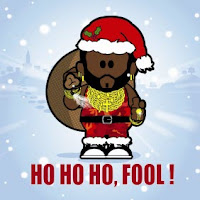