Yesterday was Valentines Day and we lost one of the greatest footballers of all time, a hero of mine, and a Preston and England legend. He was 91 , and a perfect gentleman and exemplified dignity and how to conduct yourself, as well has having a good sense of humour.

He never swore but was no pushover and when the mercenary football authorities uprooted the National Football Museum from it's home at Deepdale he told them they couldn't have his memorabilia. I'm sure it gave them more room for for their Coke and McDonalds advertising. 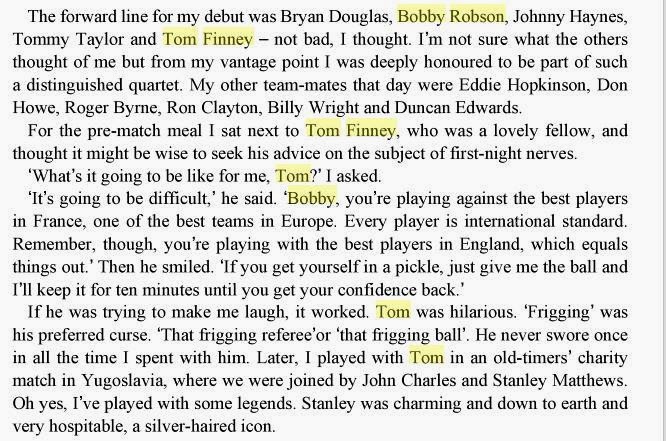 The thing is he left a huge legacy and I just love Bobby Robson's stories of him. An excerpt from his book is displayed on the right.An exemplary servant to Newcastle United.

Football today is all about money, with very few loyalties manifesting themselves. While I agree you have to make money in order to provide the entertainment, now clubs just see fans as cash cows, managers are expected to produce instant results and if they don't they are often sacked immediately.

Sometimes even if a manager has done well he sacked after a run of recent bad result. Recently Swansea dispensed with Michael Laudrup's services, Fulham dismissed Rene Meulensteen, Cardiff got rid of Malky Mackay and we're probably not finished by a long chalk. A list on the BBC is here.

These are all Premiership dismissals basically because club owners are scared of not being in the Premier League . The Championship is going the same way due to parachute payments, so League 1 and League 2 are the highest leagues where you can see real competition, where teams play on a relatively level
playing field.

Tom Finney's memory is a shining beacon that people today should emulate but  too many just look for what they can get without regard for others.