This is essentially a diatribe on how copyright law is applied when you share on social media platforms such as Youtube , Facebook and Instagram . As yet I have had no issues with Twitter. The thing is I understand if the artist is not getting any benefit for my share , or I am being disrespectful, but where I can I share a link to buy the CD or digital copy.

Instagram and Facebook seem to be the worst, I was under the impression that you could share under thirsty seconds of a song , so I tend to keep the snips to 15-20 seconds although I make it up to minute long in the video sampling multiple songs. This is just like me playing a record for friends and saying “How good is this , take a listen and if you like it buy it”. I am providing the artist and therefore the record company and copyright owner with free advertising.

I don’t share the whole song , although I did in one instance recently “The Son of Noah’s Brother” by The Incredible String Band from “The Big Huge” is only seventeen seconds long. I have not had any problems with that share.

I will admit that more often than not companies are OK.. One of my most viewed Youtube videos is a slideshow featuring the artwork of Dr Faustus portraying the Nick Cave song “Red Right Hand” (the first piece of outside music used in the “X-Files” and later resurfaced in “Peaky Blinders”) in the style of Dr, Seuss.

I contacted Dr Faustus to see if he was OK using the art work but never received a reply , but I included a link in my Youtube post. I have not had a complaint from Nick Cave or his representatives and a lot of people seem to like it from the comments that I get on the post.

However in 2014 I was listening to 6Music and the DJ (which may have been Shaun Keaveny) mentioned that Christopher Lee was 90 and had been making heavy metal albums. I checked this out and was amazed to find that Christopher Lee was descended from Charlemagne , was a Nazi hunter , has appeared in more films that anyone else and much much more. Watch my slideshow to find out. 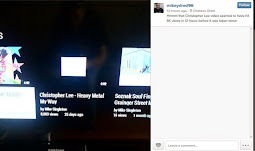 Anyway this got over 8K views on the first day and was pulled. It turns out it was Youtube and not the copyright owner , Charlemagne productions. I contacted them about it and they said they were fine with it but couldn;t do anything about what Youtube did. I was disappointed because Youtube would not reinstate it despite having the OK from Charlemagne productions.

I therefore uploaded it to my blog , which is part of the same organisation that owns Youtube and it stayed there.

When Christopher Lee died I noticed some static copies of “My Way” on Youtube , so reloaded my Christopher Lee slideshow and this time it actually stayed up and has eventually become my most watched Youtube video. I am always wary of putting something on Youtube as often videos or slideshows take time to put together and you may publish it and then find it immediately taken down, although I do try to use more obscure music mainly with the aim of getting the music to a much wider audience.

Another thing is that often Instagram / Facebook videos are removed , sometimes years after the original post , then reinstated saying that my appeal has been successful . I never appeal because they never listen when I have appealed before. Also it’s not worth my time , but it's their club , it's their rules.

So I share because I want others to be exposed to good music and I think copyright owners should take this is into account because it will probably increase their sales.