And A Day In Whitby.. 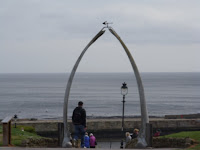 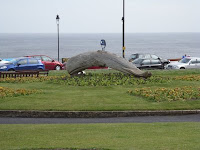 Most of Saturday was spent in Whitby. After the shock on the non roads of Robin Hood's Bay , Whitby was fine. Parked on the West Cliff car park and walked down to the town centre past the carved Whale and the Whalebone Arch.

Whitby is built on slopes towards the, what I assume is, the river Esk , so requires a lot of step negotiation and reasonable fitness , but is well worth it , with it's Gothic ruined abbey , Dracula associations , 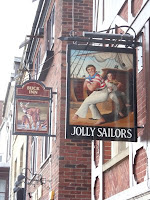 and Jet (jewellery) and other esoteric shops.

Like Robin Hood's Bay , Whitby is a marvel of ingenuity in the way the houses, shops and pubs are shoe horned together.

Breakfast was at the White Horse and Griffin , lunch at The Magpie Cafe , both absolute five star for food and service.

We visited a few pubs, one of which "The Jolly Sailor" has one of the dodgiest signs I've seen. It's here: 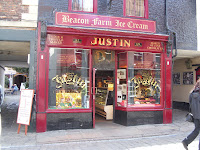 Then there's lots of Chocolate shops such as Justins where the staff were extrememly relaxed despite some customers getting extremely irateover the fact they were having to wait for service. How can you be in a rush when buying chocolate on a Saturday from a shop in Whitby? 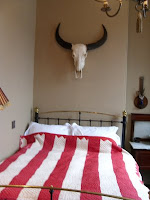 We finished with a visit to La Rosa , a superb and fun Victorian Hotel where we'll be going at the end of June. All the rooms are themed and uncluttered by such modernities as televisions and telephones, with features such as wooden baths, black bedding in the "Stoker" suite and steers skulls decorating the bedhead in the Saloon suite!. 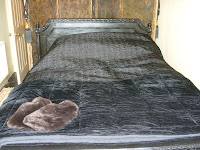 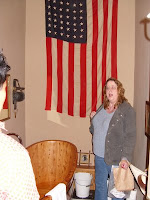