No One Loves You When You're Down ... Especially A Mackem

Well Newcastle's season finished with a whimper , hardly able to muster a shot on target against an Aston Villa side who've lost their way since Christmas , but still managed to qualify for Europe. Newcastle suitably shot themselves in the foot via a horrendous deflection off the apparently aptly named Damien Duff.

We watched the match is Tynemouth and most fans were totally resigned to the capitulation they saw in front of them. 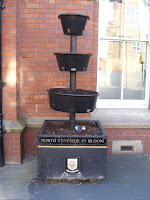 looking forward to an away match down there !! Be careful what you wish for now he has Cardiff and Swansea to look forward to.

As we went for the train we saw this Tyneside In Bloom display which sort of sums up Newcastle's season!!
Posted by Mikey Dred at 19:47