Just back from Devon and a most excellent place it is too. Discovered several things , but the most surprising was the number of thriving record shops there were . Everywhere record shops seem to be dying out (check out Graham Jones' Last Shop Standing) , but in Devon they're on the up in a big way. I'm sure I passed obne in Crediton , a small village outside of Exeter , but unsure of that.

In Exeter I found Martian Records which was shut , but it was Good Friday but here's a google link. 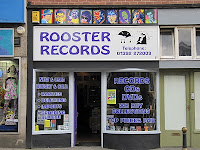 ds was well and truly open , and stuffed with vinyly , CDs and a hell of a lot of interesting stuff. The guy there reckoned business had never been so good . I helped by buying a King Crimson CD/DVD set , the reissue of Horslips' Book of Invasions , a couple of cheapies and "My Baby Loves Pop Music" by local band "A Fine Day For Sailing". Not sure if Rooster have a web site but their address is 98 Fore Street , Exeter and phone number is 01392 272009. A joy to visit. This website here is them I reckon.

Totnes was apparently descended on by hippies in the sixties and they stayed. The only concessions to globalisation are a WH Smiths and a Superdrug , as well as a bank or two and Post Office. The main shopping area of Totnes is a single, traffic unfriendly street , Fore Street I think, , it's really best to go on foot. Anyway this street boasts not one but TWO superb record shops!!

The first , a "Simon Cowell" Free zone was staffed by a young lass who'd told us of her pirate themed twenty first party. Unusually the shop contained virtually no compilations bar the odd Trojan Box Set. Their web site doesnt seem to work , but the shop does! Anyway I left with Matching Mole's BBC Sessions and a 2004 CD/DVD of the New York Dolls at the Royal Festival Hall. 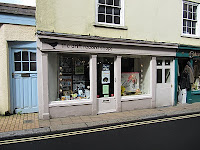 was The Drift run by an affable Irish guy who got involved with a film about the Undertones manager and reckons the reason that most record shops are going bust is because they dont talk to customers . Given my experiences in Devon and Newcastle I reckon he has a point. I left with the ew albums by Joanna Newsome and Lightspeed Champion. Their website is here.

As I write this there are NO independent record shops in York.

If you have a local independent record shop make your presence felt. Go in and buy something!!
Posted by Mikey Dred at 23:27