Queen Elizabeth The First and The National Lottery


Just a very short post . Yesterday we were and a works sales conference. Tables were named after iconic figures such as Mother Theresa and , our table, Queen Elizabeth The first. Somehow Ronald Reagan and Margaret Thatcher had slipped in there , although they feature heavily in the film "The Iron Lady" just on national release.


All tables were given a pound as an illustration of a point one of the speakers was making . What can you do with a pound . As the team leader for the table of ten I appropriated the coin with everyones agreement and put the following numbers on the lottery for tonight , 11th of January 2012. Below is the ticket , and above is an illustration of a good use of web slide controls when trying to sell products. Anyway the numbers are 32 , 33 , 34 , 36 , 38 , 39. 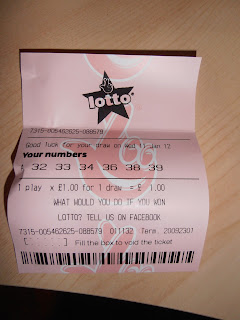 If you want to play yourself follow the link below!!