Was worried to see today that Mitt Romney was seeing no reason why the 350,000 Christian Churches in the USA could not be mobilised to bet the black man out of the the Whitehouse and put the rich white man back in the driving seat. Some details here .

The thing about this is that Christianity is getting hijacked for private gain , to make the rich richer and anyone else an ignorant slave underclass . 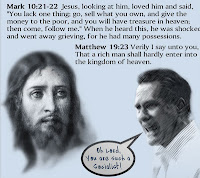 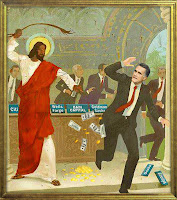 Let's assume that God exists , and the Bible is reasonably believable. Now the Jesuits were the first people to point out to me that Jesus was not a long haired white man , but middle eastern and at least very sun tanned. Also he taught love for your fellow man and to help people who were worse off than you .


There's a lot of good moral lessons in The Bible that hold true whatever your religion or non religion. I bet Richard Dawkins find big chunks of it that contains common sense.

People like Romney , just like the Taliban with the Koran cherry pick bits to suit their purposes , and amazingly people then believe it's true when they sauy "The Bible says ...."  , whether it's stone a woman to death or nuke Iran.

One of Romney's kids says he want to punch Obama . Well Obama is black and has a name that sounds like Osama Bin Laden. Remeber just after the twin towers attack George made sure the Bin Laden family were flown out of the USA before the FBI could question them.

Romney doesnt believe that the rich should be taxed. Quotes like "The problem with $40 million dollars is that it becomes $20 million after tax" are not funny , when a lot of the American underclas have the problem that "$400 after tax and living expenses becomes - $200 ".


I have no problem with economies being run efficiently but the benefits should be for all , not just a select few.
Posted by Mikey Dred at 20:13