Why Pay For Music?


For years people have said this to me, and now there's a generation that has grown believing you shouldn't have to pay for music , films or anything really. It's a sad situation and a lot of it was casued by the greed of the already rich , when they saw how they could rip off their fans with the advent of CD (Elton John and Metallica I'm pointing the finger firmly at you). Also a little at Led Zeppelin with yet another round of remasters.

When music became digitally copyable (Is that a word) , it was the first time that everyday media could be stolen over and over again. Taping from the radio was always subject to interference and copying from vinyl had to be done in real time. But ......

Just because you can do something doesn't make it right ....

And just because a band is playing in a pub you shouldn't expect it to be free.

There's costs involved , they equipment , getting there , fuel and the graft put into to learning the music.

As for CDs , while recording can be done relatively cheaply and with digital distribution you don't need to risk a costly run of music that may not sell.

Spotify is not a good model for artists as it's based on a pay per play basis , so new artists , at the best, will just get exposure. 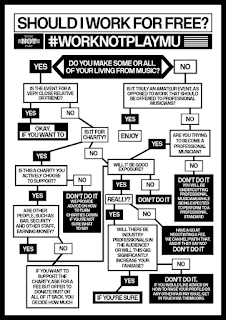 And this is what it means, every time you don't pay for something you are effectively shoplifting if
you don't have permission to take that item. Some artists give away their music and make their profit by charging a modest ten or twenty pounds for a gig . I have recently seen Nadine Shah and Du Blonde playing less than a tenner for tickets , having a brilliant night , and I bought their records too. In my small way keeping these people going. So this is really like the opening scene to Reservoir Dogs where the guy won't tip the waitress and the other guys take him to task, I'm one of the other guys.

So if you want to support music , get down to your record shop and buy some records, and get to see a band and pay to see them.

Would you work for nothing ? I think not ... so support music .

I thought the Smiths song was appropriate for this post.
Posted by Mikey Dred at 22:18