I don't know if it's getting older but I seem to misread a lot of notices and signs. One interpretation is that I'm losing it, the other is that my perception is getting sharper because I am noticing it. The title of the post is from a misreading of a book title on Facebbok.

There's a card at work that says "Thanks" but the "Th" looks like a "W" to me. Maybe that's just my dirty mind.

I once saw a "Go Ahead Northern" sign and read it as Gonorrhea, again some indication of the workings of my mind. The thing is I realise my mistake immediatly and just see it as funny. In a way it is enriching my life with extra (if mistaken) language and words. I suppose Shakespeare must have used this and played with it, although I find some of his plays (especially "Romeo and Juliet") far too wordy.

Sometimes it's a visual thing so you get the words with LI in that look rude such as FLICK and CLINT which seen in the wrong light can cause a little consternation.

Carry On Films also exist for innuendo and mistaken meanings although barring "Carry On Cleo", "Carry On Up The Khyber" and "Carry on Screaming" most of them fall flat for me.

I am just going to put a list of my mistaken reads here which I may update as I find more. It's a bit
like the Clint chocolate cake: 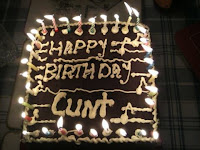 So what song should go with this, sometng literary and wordy, although all songs contain words, and there are so many songs that have mis heard lyrics such as "Kiss The Sky / Kiss This Guy" from "Purple Haze by Jimi Hendrix. Although I've used it before I've going to go with "Wrong" by Archers of Loaf one of my favourite ever tunes which I first heard on "The Speed of Cattle" and perfect for me contiually getting words and phrases wrong.