Just a few Sunday Morning thoughts on the nature of comedy. One of the problems I sort of see for a comedian is that once a joke is told it's out there, it's done, so sometimes you will see the great comedians who actually tell stories, to which there may or may not be a punchline , but the journey provides the fun.

All these people can talk , but obviously put a lot of work into what they say and I have seen and chatted with all of them at The Stand and various places in Newcastle. 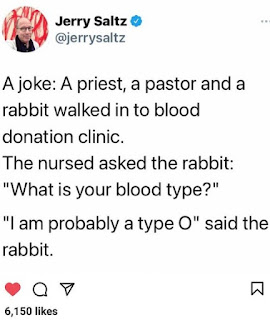 Sometimes comedy can only work as the written word such as the Jerry Saltz one which you can see to the right. I've tried verbalising this and it just doesn't work , and the really good thing about this is that it makes your mind think.

When a comedian is live they have to keep this up all the way through , otherwise they die on stage.

But on writing this I am thinking that once you hear a joke then that's it , but it isn't. A good comedian you can watch tell the same jokes over and over , but really the jokes and one liners provide a framework for the act to be delivered.

Though not the same it's like going to see a band who's songs you like. They will play the same songs but maybe in a different order, embellish the style or strip it down to give you a different experience.

With TV Comedy I can watch "Black Books" , "Father Ted" and "The IT Crowd" over and over, "Fawlty Towers" I find more difficult but it is still dunny and always loved the rearrangement to to hotel name at the start of each episode. Again it's a pleasure for me and the characters being total enjoyment.

So while I could take an excerpt from a TV show or one of the acts I listed, I will just link through and their names and share the wonderful "Comedy" by Shack with you , because it is a great song.