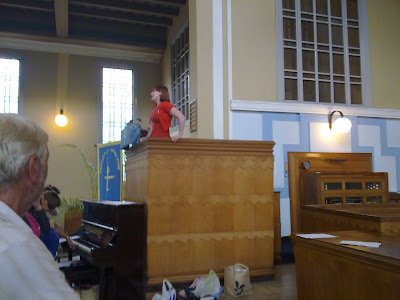 This is the third rehearsal I've attended and still out of my depth but managing to fit in , I hope. This time we were at the Durant Hall (no not Sharon's house) Unitarian Church in Newcastle and this was a five hour run (10-4 with lunch break). The picture on the right is Sharon in the pulpit after several of the many choir members were unable to see her. She cut a great figure leading the choir from "on high" so to speak , fairly appropriate given the nature of most of the music we are performing!!

One of the songs I'd loved from the list we were doing is Leadbelly's "Bring A Little Water Silvie" , Sharon' arrangement here , it goes with saying is gorgeous , so had to track down the original. which is here accompanying this video!!:

One of my problems is getting the versions of songs out of my head that I know. "Daddy Sang Bass" I hear Johnny Cash , "The Circle Wont Be Broken" , I hear as "Will The Circle Be Unbroken" which I first heard by The Nitty Gritty Dirt Band.

"I'll Fly Away" was featured in the Coen Brothers retelling of Homer's Odyssey as a jailbrak during the thrities depression in the deep south, as was "Down To The River To Pray" used to stunning effect in the Redemption Sequence. Amazingly the whole of the sequence vcan be watched here - "Come on In Boys, The Water is Fine!":