Finally On Stage at The Sage 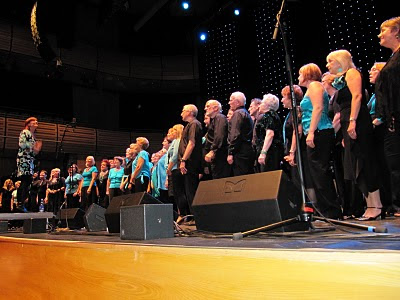 This saga would be ideal for an episode of Sesame Street , dominated by the letter "S" , Summertyne , Solomon Burke , Sharon Durant the choir leader, The Sage, and the lovely Sally Kat who organised and also sang in the choir as well as letting me tag along.

The final rehearsal was on Thursday , and again Sharon tooks us through the warm up , and the songs , cueing the four or five parts for each song and getting everyone to sing and sound absolutely heavenly . The members of the choir were extremely professional and able , and unfortunately I didnt get anyones name , but who knows . Luckily I was fairly close to a pleasant bearded chap called Gary who really could sing , so tried to follow what he did.

In the last rehearsal the choirs had organised a presentation of some beautiful flowers for Sharon and Sally for all the amazing effort that had gone into this venture.

Finally we made the stage , no dressing rooms for us , just waiting in the corridor waiting to come on. As always with these events , you practice and work for weeks and as you step out , even as a group of 80-90 strong the nerves still get you , and then suddenly it's over - half an hour goes by in a second. Sharon metaphorically held our hands and guided us through the set from "Daddy Sang Bass" to the closer "Great Day" , each bringing amazing applause from a packed Hall One at the Sage. Here's a tour of Hall One if you've never been there.

Afetr that it was sit back and enjoy the superb "Phantom Limb" and country . soul , blues band with a stunnig lead singer more that ably backed by a bunch of superb musicians. Below is a video from them on Balcony TV. 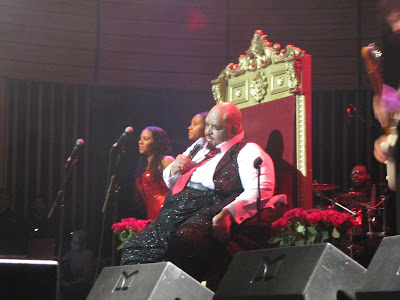 Then finally , the headliner , Solomon Burke with a band featuring his youngest daughter Candy as band leader - who got here own spot when she sang Gloria Gaynor's "I Will Survive", and his 37th grand daughter (forgot her name) who stunned us with a cracking rendition of Dorothey Moore's "Misty Blue".

Solomon held the crowd in the palm of his hand from start to finish , resplendent in his sparkly suit on his majestic throne , still the true king of "Rock and Soul" . Stand outs for me were "Nashville" and the Atlantic medley , but the growd were jumping , clapping , dancing , problem being after clapping through a number your hands are too sore to applaud!!

Finally the choir were invited on stage to back Solomon on "None of us are Free"and we stayed on to back him on a rock and roll medley includin "Proud Mary" , Lucille" , Tutti Frutti" and a few others.

The concert closed with "Everybody Needs Somebody To Love" which ran in to "The Saints".

Some other nice touches to the night is that Solomon gave Sharon the microphone during "None of Us Are Free" and all the girls I went with got a rose from Solomon. One of the greatest nights for a long long time and I wont be forgetting it. If you get the chance go and see this man.
Posted by Mikey Dred at 07:48