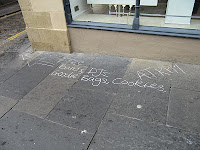 After the success of National Record Shop Day , RPM in Newcastle decided to throw a free mini festival to celebrate Independence Day with setd from several independent bands . The advertising on the right was brilliant - some chalk instruction on Grey Strret at the entrance to High Bridge!! Being to the total wimp that I am , I only clocked the first four bands , but the standard was excellent and the setting sublime despite the weather changing from one moment to the next alternating between rain and sunshine with a bit of rain. 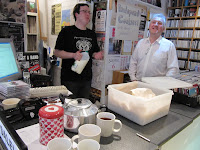 gise that I dont know the names of any of the RPM staff but they are a great lot and very helpful . They provided tea and cookies to anyone who wanted , the cookies freshly baked by a lovely young RPM girly who was also doing the raffle. I think her talants expand much further than what she was doing today - but her cookies are to die for!! The tea and cookies set up is to the left. 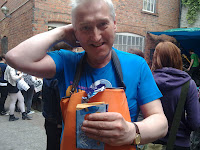 Also one of the guys came out dispensing ice cream in wafers during the sets , how good is that !! Amazing how many people declined but I had two , though ended up with sticky fingers as a result of the ice cream melting!!


The Running Order was as below. Click on the names to hit the myspace page and hear what you missed:

In the same univ 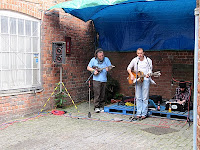 erse as Mumford and Sons , melodic and imaginate use of percussion and mandolin , well worth going to see if you can catch them . The weather suited them and as all the band were great crowd plaeasurs and good to talk to after the gig. 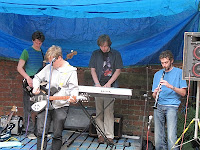 d me as the first band I'd seen sporting a cornet (woodwind not ice cream) sing Roxy Music on the Old Grey Whistle Test around 1971. Reminded bme a bit of Elbow , songs maybe a bit downbeat , but were self deprecating and had some good banter . Would recommend them , and again good company after the gig. 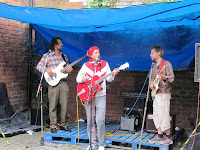 med upbeat combo were fromted by a guy with a most amazing moustache , with a vaguely rockabilly feel . Visually great and got the crowd going , didnt get a chance to chat , as it was almost home time for me.


The last band I heard , and the loudest on the day . New order type feel for this three piece.
Sorry didnt get to see these.

All in all an excellent day , looking forward to the next one
Posted by Mikey Dred at 17:57