Yesterday I signed up for The Gospel Choir , who will be on the same stage as the King of Rock and Soul , Solomon Burke. While I knew of Solomon Burke he only burst into my musical sphere when he released the album "Don't Give Up On Me" which contains the excellent "None of Us Are Free". This was sceduled in for the Gospel Choir to perform , But Mr Burke wishes to sing the song himself with the Gospel Choir, this is beyond my wildest expectations. Here's him in 2003 on Top of The Pops with Steve Wright getting the description correct for once:

Heres a link to Emusic that will allow you to download the 2002 album with a free trial.

Anyway I 've joined up with the Gospel Choir half way through rehearsal , and choir consists of outsiders like me, a core of the Custom House house choir , and various memebers of other choirs including a student called Lauren who guessed I was going there as she noticed me dropping my sheet music as I dozed on the Metro !! I was gonna get a taxi but she guided me straight there and told me where to sit , with the half a dozen men , among the multitude of ladies!!

The Choir is led by Sharon Durant , who's voice is the purest I've heard since Joan Baez and that's saying saying something . Her choir website is here , which gives details of what's happening as well as link to "Mouthful" , the accapella group that she is a member of.

Sharon's voice alone deserve's a page article , but she is leading this thing, arranging all the parts for all the different parts of the choir , singing those parts out for the groups to sing , and then getting everyone to sing their parts and bring them together to make a harmonious whole. The work , skill , talent , and enthusiasm of this lady is a wonder to behold .

Last night we worked though "Down To The River To Pray" and "Daddy Sang Bass / Will The Circle" . I started with sheet music and lyric sheets , but Sharon is so good that she had me ditching the paper and following her, and I'm not that hot on the old remembering front!! The music Sharon has lined up consists of a wide ranging spread of Old Time Americana featuring arrangements of traditional material as as Leadbelly and Carl Perkins songs.

Anyway this is Day One from me , working towards the night on the 23rd of July which we join the bill with Mr Burke. When I left I needed to get to North Shields and missed the ferry by two minutes resulting in a half hour wait in a deserted Ferry Terminal , but saw some amazing cloud formations , so maybe even that was worth it... 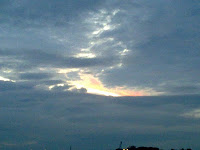 If you fancy the concert , there's a link to a two for one ticket offer here.
Posted by Mikey Dred at 01:48