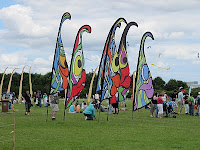 Today attended the International Friendship Festival / Wahington Kite Festival with some great friends. I've never been able to fly a kite so to see the sort of skills on display here today was jaw dropping. There were things that should just be impossible , but people were doing it. Apparently its all in the preparation !!. Well I could probably do a decent impression of a Kamikaze Kite!! Here's their website that in true local authority style manages to give no directions on how to get there (check these maps of Sunderland) but there is a good picture of a kite !!

Anyway took some video , and despite the fact that my camera uses Apple's idiot MOV format that Microsoft Movie Maker imports but then outputs a nice black screen from , I've put together some footage of the absolutely amazing stuff we saw today . Soundtrack is "Kites" by Simon Dupree and The Big Sound (who later became Gentle Giant) and can be downloaded here. Enjoy...