This is just a short post about problems that I was not aware of with batteries. I ordered a replacement battery for a laptop and Amazon delivered via their lockers in 24 hours. That was great. 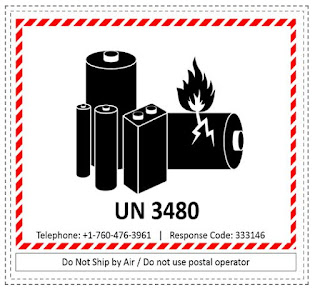 However that battery was not for my laptop even though it was on the list of compatible items so I followed the return procedure. I had to put a label on that stated this was a hazardous item and should not be sent via post or airmail.

I then searched for couriers who would take batteries but couldn't find any. I thought I had found one, but the just used established couriers and were going to send via DHL who do not take batteries.

In my search I found that people said the carriers scan for batteries and if they find they they just destroy them and you lose the battery.

Because of the nature of batteries they could actually burst into flames, but are apparently ok if they are in the device that they power.

Personally I would think that would make them more dangerous.

Amazon then recommended Parcel Monkey , great name but they are very clear about batteries as they state here. . Another call to Amazon and they game me a refund and told me to keep or dispose of the battery, so all was resolved in the end although I still need to source a replacement battery.

I got a call from Parcel2Go who said I could send a battery through them but it wouldn't be covered for compensation, so I will bookmark them in case I need to send anything in the future.

So an appropriate piece of accompanying music would be "Battery" by Metallica though I could have chosen other songs by Hawkwind or Genesis.